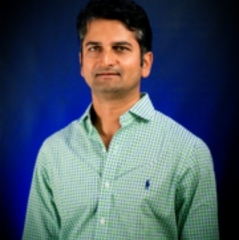 As a Research Scientist at the Center for Human, AI and Robot Teaming and the Decision Theater, Dr. Amresh conducts research in the development of Serious Games and previously he led the Computer Gaming curriculum initiatives at Arizona State University, where he founded the Computer Gaming Certificate, Camp Game and UTBC summer programs. He was the founding program chair for the Simulation Science Games and Animation program at Embry Riddle Aeronautical University and his industry pursuits included working for Ronin Entertainment as a Graphics Software Engineer known for Star Wars: Force Commander and Bruce Lee Quest of the Dragon games. He is the author of Unreal Game Development, a popular book used for teaching game development skills for high school students. He has given numerous talks on using games in the class room for enhancing math and science learning. He is currently researching the development of software tools to improve game based learning outcomes.