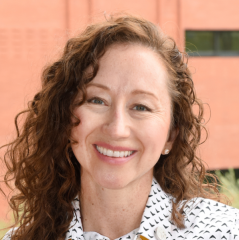 Eileen Díaz McConnell is President's Professor in the School of Transborder Studies at Arizona State University.  She earned her doctorate in Sociology from the University of Notre Dame in 2001 and previously worked at Indiana University and the University of Illinois.

The first is the broader implications of U.S. immigration policy and the consequent lack of opportunities for paths to citizenship as a structural barrier hindering the mobility and incorporation of Mexican and Central American immigrants and their families. For instance, a co-authored paper examines the associations of parents’ nativity, citizenship, legal status and children's age with children’s participation in structured after-school activities, published in Applied Developmental Science in 2020. In other studies published over the last half decade, she has focused on identifying where and when legal status leads to disparities in housing and wealth outcomes such as residential crowding, homeownership, housing affordability, and non-housing wealth. Partially funded by the National Institutes of Health (R03), these appears have been published in Ethnicities, Housing Policy Debate, Race and Social Problems, Social Science Research and Social Problems.

Other related quantitative work focuses on the survival strategies and resilience of Mexican and Central American immigrants navigating anti-immigrant policy contexts. A co-authored article draws from asset-based perspectives to explore how Mexican and Central American parents in the U.S. support their families, via family routines and maternal knowledge of children's friendships; published in International Migration Review in 2020.

A second area weaves together Professor McConnell’s interests in U.S. population dynamics and media representations of racial/ethnic groups, and public opinion about the growth of people of color in the United States. One in-progress paper explores non-Hispanic Whites’ views about the projections of future ethnoracial diversification, another considers how misinformation about the demographics of U.S. immigrants might be associated with immigration policy priorities among U.S. adults. A long-term research interest, this work includes analyses of mainstream newspaper coverage of 1990-2000 racial and ethnic population change in Atlanta, Georgia; representations of 1990-2020 Latina/o/x population growth in the Los Angeles Times, and the number of unauthorized immigrants in Arizona as covered in the Arizona Republic. This work has been published in Aztlan: A Journal of Chicano Studies, Latino Studies, and the Sociology of Race and Ethnicity.