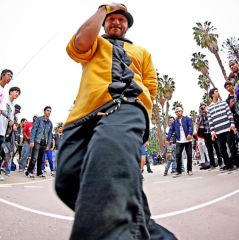 Rooted with over 26 years of Accomplishments and Contributions to Arizonas Hip Hop Community, he has traveled globally planting seeds of awareness to develop programs, events, and longevity for youth. He is co-founder of Furious Styles Crew, an organization that creates collaborations and networks of socially engaged work and has become a pillar in Arizona's art communities.

His stage work has led him to a 29 city tour in Japan along side The "Tap Dogs" as well as representing team USA in Red Bulls London “Beat Battle”, New Zealand’s X-Air games and in Germany for “Battle of the Year” to name a few. House has appeared at the Furious Styles Crew Anniversary as President/dancer/ and Co-producer, and has just celebrated their 26-year anniversary. House has been part of the NBA’s Phoenix Suns fast Breaker, Wnba’s Hip Hop Squad, and the NAS, "I Can" music video. With his recent return from Europe teaching, competing and judging in continuing the development  of Furious Styles crew with their extended chapters in Spain and Denmark.

As an Asu graduate with a B.A. in Psychology / Sociology a M.F.A, he can be seen teaching and lecturing at Universities, Colleges and schools across the country on Hip Hop Culture. He most recently was selected by the U.S. department of State to participate in (two residencies) the 2017-2018 Next Level program and spent two weeks overseas in Morocco to lead art workshops that engage local artist and young people, encourage entrepreneurship, and promote conflict resolution. The Next Level program is designed to share America’s rich Hip Hop music, dance and visual art contributions to the global cultural scene as it fosters cross-cultural communication and people to people connections to global audiences.

Civil Disobedience/Urban Sol, Come As You Are