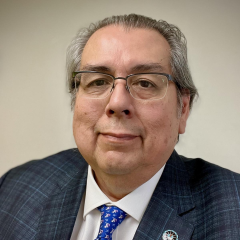 David Martínez (Akimel O'odham/Hia Ced O'odham/Mexican), Professor of American Indian Studies, is the author of Dakota Philosopher: Charles Eastman and American Indian Thought (2009), editor of The American Indian Intellectual Tradition: An Anthology of Writings from 1772 to 1972 (2011), author of Life of the Indigenous Mind: Vine Deloria Jr and the Birth of the Red Power Movement (2019), and author of My Heart Is Bound Up With Them: How Carlos Montezuma Became the Voice of a Generation (2023). As a teacher and scholar, his areas of concentration are Indigenous intellectual history; O'odham culture, history, and politics; Transborder Indigenous nations; and, Indigenous art history and aesthetics. Currently, Martínez is working on his fifth book, titled Elder Brother's Forgotten People: How the Hia Ced O'odham Survived an Epidemic to Claim a Place in Arizona's Transborder History.