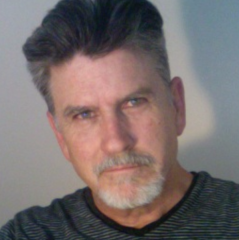 Christopher Bradley started out as a professional actor, moving between New York, Los Angeles and Europe doing stage, television and films. He was then accepted to the master's program in screenwriting program at University of California, Los Angeles, where he won several contests including the Alfred P. Sloan fellowship in screenwriting. He teaches Beginning, Intermediate and Advanced Screenwriting in Film and Media Studies, in ASU's Department of English, as well as Hollywood Film History. His short film The Violation is being distributed by Pecadillo Films in the UK. He recently completed his first feature film, The Trigger (his IMDb information here).

Christopher has just completed his first feature film, The Trigger, and is not entereing it into film festivals.  The Trigger tells the story of ERIK, 19, who is just out of prison for drug sales and wants to experience just one day of his dream of a "normal" life as a family; just one day in an apartment of his own with his girlfriend, HEATHER and his dog MERLIN.  When his former drug supplier BENNIE realizes Erik got out of prison by informing on him, Erik's dream quickly unravels and he has to take quick action to keep those he loves from being taken down with him.