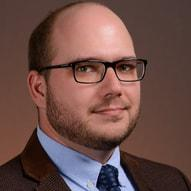 His primary research interests include state repression and human rights, and international conflict dynamics. His research has been published in journals such as International Studies Quarterly, International Interactions, Journal of Conflict Resolution and Journal of Peace Research. He was also awarded, along with his co-principal investigators, a multi-year grant from the National Science Foundation to collect data on sub-national variation in human rights practices.