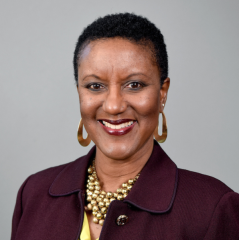 Olga Idriss Davis is passionate about enhancing communication to improve the health and well-being of underserved populations. She helped establish a health coalition for refugee women in Maricopa County and was appointed by Governor Napolitano to serve on the State Commission on Women’s and Children’s Health. In addition, Davis is intricately involved in promoting health among the African American community in Arizona. She works with the Phoenix-based Coalition of Blacks Against Breast Cancer and has created a narrative play, "The Journey: Living Cancer Out Loud," based on interviews of the experience of African American survivors and caregivers of breast cancer which has been performed in various community and hospital venues in Phoenix and Scottsdale. Raising awareness in Black barbershops, Davis addresses knowledge of cardiovascular disease among African American men in Phoenix, Arizona.