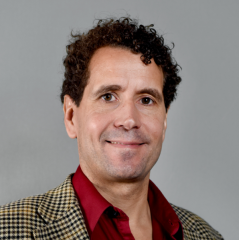 David Grau (“au” pronounced like “ow” in allow) is an assistant professor in the School of Sustainable Engineering and the Built Environment at Arizona State University. Grau graduated with both a masters degree and doctorate in civil, architectural, and environmental engineering from the University of Texas at Austin, and with an industrial engineering degree from the Universitat Politècnica de Catalunya in Spain. Previous to his affiliation with ASU, he taught at the University of Alabama as an assistant professor for four years.

During his academic career, Grau has received numerous teaching and research awards, including the Distinguished Professor Award by the Construction Industry Institute and the Celebration of Engineering & Technology Innovation (CETI) award by FIATECH. Complementing his academic career, he has worked in the private industry for more than 10 years inclusive of positions such as program manager for heavy industrial projects and director of a large engineering design department. He has led large interdisciplinary and multicultural teams to deliver numerous capital projects in South America, Africa and Europe. Grau is a member of ASCE and ASEE professional societies and holds a professional license as Industrial Engineer in Spain.

Read a faculty profile of David Grau written in conjunction with the grand opening of the College Avenue Commons in 2014.