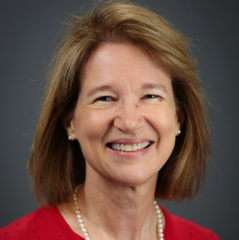 Carolyn M. Warner is a professor of political science in the School of Politics and Global Studies at Arizona State University. Warner’s research and teaching areas are religion and politics, the military, and the political economy of corruption in the global political economy. As of July 1, 2019, she will be the Vail Pittman Professor and Chair of the Department of Political Science at the University Nevada Reno.

She was co-director, with Professor Linell Cady, of a Luce Foundation-funded project, “Religion and International Affairs: Through the Prism of Rights and Gender”. The program included a two-year interdisciplinary faculty seminar, public speakers, policy-makers in residence, seed grants, and new graduate seminars.

Her book, The Best System Money Can Buy: Corruption in the European Union, was published with Cornell (2007) and was selected as a Choice Magazine "Outstanding Academic Title" in 2008. She is author of Confessions of an Interest Group: the Catholic Church and Political Parties in Europe, (Princeton 2000), and lead author of Generating Generosity in Catholicism and Islam: Beliefs, Institutions and Public Goods Provisions (Cambridge 2018). She has published a number of articles in various journals.

Currently she serves as one of the two Associate Directors in the School of Politics and Global Studies, in charge of the graduate programs in Political Science and in Global Security. She served as faculty head/coordinator of the political science faculty from 2009-2013, and has served on the ASU University Promotion and Tenure Committee and on the CLAS Dean's Faculty Advisory Council.

Her commentary on the Catholic church and clergy child sex abuse was featured on National Public Radio, at

Findings from earlier work on religion and politics are briefly described in the Washington Post "Why give to charity? What Muslims and Catholics have in common,”  and in ASU Now: " Does religion turn weak groups violent?."

She is proficient in French and Italian.

Sex abuse/assault in the military and the Catholic Church

Political corruption, particularly in the European Union and in the global political economy.