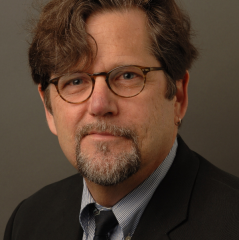 Gregory Castle’s research interests are primarily in Irish studies (especially the works of James Joyce, W. B. Yeats, Augusta Gregory, John M. Synge, George Moore, Emily Lawless, Oscar Wilde and Bram Stoker). In addition, he has written on the history and theory of the novel, literary modernism, and literary and cultural theory.

Castle’s first book, Modernism and the Celtic Revival (Cambridge University Press, 2001), was the “runner-up” for the Robert Rhodes Prize for Books on Literature, sponsored by the American Conference for Irish Studies (ACIS) in 2002. In this book, he explores the textual means by which anthropology and ethnography contributed to the formation of Irish culture. There are many fruitful connections to be made between the discoveries of these new fields of study and the literary innovations of the Irish revivalists, connections which underscore the dual nature of Revival, for it was progressive politically even while it was complicit with the colonialist tendencies of anthropology. Reading the Modernist Bildungsroman (University Press of Florida, 2006), Professor Castle’s second monograph, was the first full-length study of British and Irish Modernist Bildungsromane and features analyses of works by Thomas Hardy, D. H. Lawrence, Oscar Wilde, James Joyce, and Virginia Woolf. Drawing on Theodor W. Adorno’s theory of “negative dialectics,” Castle argues that the modernist Bildungsroman witnesses the failure of its own narrative telos (the dialectical harmony of social responsibility and personal desire) – a failure that does not prevent the modernist hero from perfecting (or trying to perfect) what Johann von Goethe and Wilhelm von Humboldt called “inner culture” (Bildung).

Professor Castle’s current research project, W. B. Yeats, Modernism and the Temporalities of Irish Revival, seeks to renew our understanding of Yeats and the centrality of Revival to the poet’s œuvre (not just the early work) and to Irish modernism. In contrast to the conventional (and now widely disparaged) view that Yeats was central to Revival, I argue the reverse: that Revival was central to Yeats, and not just in his early work on Irish folk culture. By reading Yeats and Revival together again, after decades of new thinking about both, I am making an argument for reconciliation, for the return of a great writer, with all his flaws and shortcomings—all the “accident and incoherence” of his own Bildung—to the Revival stage on which he saw himself, and on which, I contend, he wanted his readers to see him, “intended, complete.”

In addition to the the study of Yeats, Castle has another one planned on the global and postcolonial Bildungsroman, which would begin with Joyce (of course) and proceed through the twentieth and twenty-first centuries, examining exemplary texts from around the world (most from Anglophone traditions). Aspiration, freedom, the persistence of inner life—these vital components of the modernist Bildungsroman remain relevant for postcolonial and global writers whose protagonists seek to become the heroes of their own Bildung. However, the freedom acquired through aspiration does not always remain within the confines of inner life. Indeed, if we look at formative fictions in the twenty-first century, communal belonging begins to trump inner life, though the struggle for freedom of aspiration remains as the driving force of narrative. The utopian promise of the global Bildungsroman lies in the transformation of inner life in pursuit of a larger universe of belonging.

Castle’s interest in literary has led to a number of projects. He began in 2001 by editing Postcolonial Discourses: A Reader (Blackwell, 2001), a selection of essays on postcolonial theory arranged by region (a novelty at the time) and including a section on Ireland (another first). In 2011, he edited vol.1 of the Blackwell Encyclopedia of Literary and Cultural Theory: 1900-1966, the first of a three-volume set under the general editorship of Michael Ryan. This text includes over a hundred entries, by nearly seventy scholars. Fours years earlier, Castle published the first edition of his theory handbook, Guide to Literary Theory (Blackwell 2007); this edition, an alphabetically arranged guide to major theories and theorists, was quickly outdated. In 2013, after Blackwell had merged with Wiley and Sons, he published a second edition under the Wiley Handbook series. The Literary Theory Handbook (Wiley-Blackwell) was updated and expanded to include new chapters on neo-Aristotelian theory, the theory of the novel, post-Marxism, phenomenology and hermeneutics, trauma studies, ethnic and indigenous studies, transnationalism, posthumanism, evolutionary literary theory, object-oriented ontologies, disability studies and ecocriticism. The first edition included a history of theory, and this has been expanded and updated in the new book. The chapter on Key Figures has been augmented with 10 new biographies and the glossary updated and refined. As with the first edition, the new one includes sample readings to illustrate the practical application of theory.

Professor Castle has in recent years made two contributions to the Cambridge series of literary and cultural histories. In 2015, he published (as editor) A History of the Modernist Novel, which included a substantial introduction and twenty four chapters written for this volume. In 2018, he published (as co-editor, with Patrick Bixby) A History of Irish Modernism. In 2016, he published (as co-editor, with Patrick Bixby) Standish O’Grady’s Cuchulain: A Critical Edition (Syracuse University Press), which brings together excerpts from O’Grady’s History of Ireland (in three volumes, published in 1878-1881). In addition to the excerpts, annotated and connected by short summaries of excluded material, the volume includes a scholarly introduction (by Castle), four scholarly essays commissioned for this edition, a brief biography of O’Grady, timeline, maps, glossary, and editorial notes. Standish O’Grady’s Cuculain offers a wealth of specialized research and interpretation in a way that will be accessible to students and general readers alike.

Finally, it is worth noting that, since 2015, Professor Castle has served as book review editor for Twentieth-Century Literature.

See the CV for descriptions of the books and a list of articles, review essays, book reviews and conference papers.

He has regularly taught 500-level graduate courses in literary theory, the novel, and British and Irish modernism. He offers graduate seminars on a variety of authors, including Joyce, Yeats, and Samuel Beckett. Recent seminars have focused on modernist poetry, modernist aesthetics, Irish modernism, Joyce and psychoanalysis, colonial and postcolonial Bildungsromane, Irish literature and decolonization, anthropology and literature, Yeast and the Irish Revival, and the Irish Gothic.

Since spring 2017, he has been designing and teaching courses for the MA online degree program. He regularly teaches ENG 502 Contemporary Critical Theory and courses on Irish modernism and (at the undergraduate level) postcolonial literature. He also co-administers (with Ron Broglio) the Graduate Critical Theory certificate that fields students from across many disciplines at ASU.

Professor Castle has chaired several major university committees and served as Director of the MA program and of Undergraduate studies. Details about university and professional service can be found on his CV.