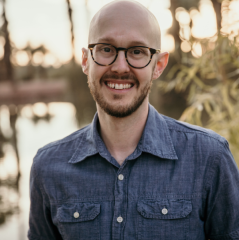 Blake Hartung is an Instructor of Religious Studies and History at Arizona State University. Broadly speaking, his research focuses on Christian literature and culture in the Middle East in late antiquity (third through seventh centuries C.E.), with a special emphasis on the Syriac Christian tradition. His most recent work explores the roles of liturgical poetry in the formation of Christian imagination and identity along the eastern frontiers of the fourth-century Roman Empire. He is also a translator for a co-authored volume of the poems of Ephrem of Nisibis (307-373 CE), forthcoming from Catholic University of America Press. His other research interests include the relationship between religion and political culture and manuscripts/book production in the ancient world, all of which informs his classes on ancient history at ASU.

He has participated in a collaborative effort to digitize and catalogue thousands of manuscripts from the Vatican Library and held a postdoctoral fellowship in Eastern Christian Manuscript Studies at the Hill Museum and Manuscript Library (2019). He has also worked for several seasons on late Roman/Byzantine period archaeological excavations of the ancient city of Abila (northern Jordan).