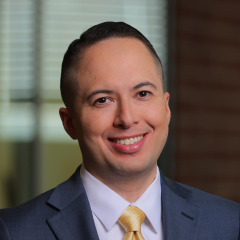 Christian Osmeña is vice president for enterprise planning, where he leads research, planning, and analysis to support the long-term growth of the ASU Public Enterprise. He is also a professor of practice in the Watts College of Public Service and Community Solutions and the Mary Lou Fulton Teachers College.

Before joining ASU, Osmeña served for more than a decade as a leader in California state government. He was a vice chancellor for the California Community Colleges, the largest system of higher education in the United States. Earlier, he worked at the California Department of Finance, where he focused on education policy and finance. He also served in the Office of the Governor of California as the assistant to the Governor’s chief of staff and as a deputy cabinet secretary.

He is currently a member of the Arizona Early Childhood Health and Development Board, also known as the First Things First State Board. He is a former member of the University of California, Hastings College of the Law Board of Directors.