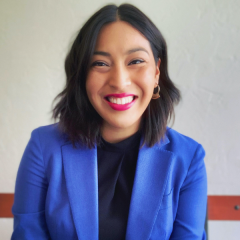 Dr. Angie Bautista-Chavez is an Assistant Professor in the School of Politics and Global Studies. She integrates approaches from the fields of American politics, organizational behavior, and international relations to study the politics of U.S. immigration policy and enforcement.

Her research on the bureaucratic politics of U.S. immigration politics shows that the U.S. bureaucracy is not merely a passive institution that mediates between the U.S. government and migrants. In her book project, Exporting Borders, Bautista-Chavez shows that the immigration bureaucracy is itself a political institution composed of powerful actors who advocate for, set agendas, and make policies that drive the externalization of U.S. borders. Bautista-Chavez also conducts research on the strategic behavior of civic and political organizations.

Angie Bautista-Chavez specializes in the politics of U.S. immigration policy and bureaucratic politics.

“The Bureaucratic and Administrative Politics of U.S. International Migration Control”

Political scientists often treat U.S. immigration policy as domestic policy shaped by U.S. domestic politics. But far less visible and less well understood is the international arm of U.S. immigration policy and enforcement. Today, the U.S. Department of Homeland Security has a global presence and works alongside other U.S. executive agencies to shape the journeys of migrants long before they reach U.S. territory. In this book project, I examine the internationalization of U.S. immigration policy and enforcement. I explain the role and influence of executive branch mid-level bureaucrats, actors who are often overlooked as key players in the making, management, and implementation of immigration policy. Empirically, I conduct interviews with government actors across administrations and across national agencies in the United States and Mexico, interviews with leaders of think tanks, non-governmental organizations, and international organizations, along with analyses of congressional records and executive agency data and reports. While presidents and legislators are often understood as the key makers of immigration policy, I argue that mid-level bureaucrats within the U.S. executive branch behave strategically to internationalize U.S. immigration policy, especially by increasing cooperation between U.S. and Mexican bureaucracies. Transnational bureaucratic cooperation, in turn, is used to repatriate, monitor, intercept, and deter unwanted migrants, including individuals and groups of Mexicans, Central Americans, Haitians, Cubans, and individuals from across Asia and Africa, among others. By documenting the administrative architecture of migration control, I aim to describe the total of U.S. immigration enforcement, demonstrate gaps in bureaucratic oversight, point to potential levers of accountability, and question the normative dimensions of interstate and interagency cooperation. Ultimately, this book project contributes to ongoing research that documents, explains, and scrutinizes the behavior of states against migrants.