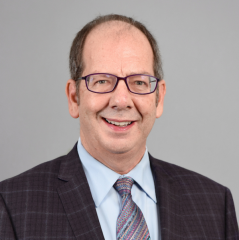 Clark Olson studies civility, rhetorical irony, and political widow rhetoric and has co-taught a graduate methods module on facilitating Civil Dialogue. He has participated in the design and development of Civil Dialogue, a format designed to foster civil communication when discussing controversial topics. In addition to facilitating Civil Dialogue events in public venues, he has introduced Civil Dialogue as an alternative to traditional debate in his argumentation classes at ASU. He is also the former director of the ASU Forensics Team (speech and debate). He also teaches theories of successful relationship development and a graduate seminar: Politics, Performance, and Art. He is a founding director of the Institute for Civil Dialogue and currently serves as its president. Most recently he published the book "Hot Topics, Cool Heads, A Handbook for Civil Dialogue" (2018). He has published more than 40 articles and book chapters and has twice won the  National Communication Association's Golden Monograph Award for the best article in the discipline (2005, 2019) and was recognized by the American Forensic Association's National Individual Events Tournament with their Distinguished Service Award in 2014.