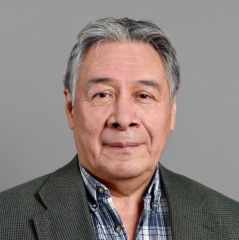 Donald L. Fixico (Shawnee, Sac and Fox, Muscogee Creek and Seminole) is Regents and Distinguished Foundation Professor of History. He is a policy historian and ethnohistorian. His work focuses on American Indians, oral history and the U.S. West. Professor Fixico has worked on 25 historical documentaries. He has published 15 books: "American Indians in a Modern World" (2008); "Treaties with American Indians: An Encyclopedia of Rights, Conflicts and Sovereignty, 3 volumes," (Ed, 2007); "Daily Life of Native Americans in the Twentieth Century" (2006); "The American Indian Mind in a Linear World: American Indian Studies and Traditional Knowledge" (2003); "The Urban Indian Experience in America" (2000); "The Invasion of Indian Country in the Twentieth Century: Tribal Natural Resources and American Capitalism" (1998), 2nd ed., 2011; "Rethinking American Indian History," (Ed. 1997); "Urban Indians" (1991); "An Anthology of Western Great Lakes Indian History," (Ed. 1988); and "Termination and Relocation: Federal Indian Policy, 1945-1960" (1986). His books also include, "Call for Change: The Medicine Way of American Indian History, Ethos and Reality" (June 2013) and "Indian Resilience and Rebuilding: Indigenous Nations in the Modern American West" (2013), see Cspan and "That's What They Used To Say: Reflections on American Indian Oral Traditions" (2017) and "Indian Treaties in the United States" (Ed. 2018).

At the undergraduate level, Professor Fixico has taught a survey history of "American Indians Since 1900" and a pro-research seminar for history majors. He has directed independent studies, honor theses for Barrett, The Honors College and theses at the Arizona State University West Campus. At the graduate level, he has taught seminars on "Federal Indian Policy, Laws and Treaties," "American Indian History Research Seminar," "An Oral History of the American West," and "Readings in the American West." Professor Fixico has directed master's theses and doctoral dissertations and serves as an advisor to several graduate students. He has been a mentor to students as well as to junior faculty in the Provost's Mentoring Program.

In 2000, President Clinton appointed Professor Fixico to the Advisory Council of the National Endowment for the Humanities and in 2002 he was the John Rhodes Visiting Professor of Public Policy in the Barrett Honors College at Arizona State University. In 2006, the Organization of American Historians awarded a short-term residency award to Professor Fixico to give lectures for two weeks in Japan. Professor Fixico has given lectures nationally and internationally and works with tribes and indigenous organizations. In 2012, he lectured at Sichuan University in China and Auckland University in New Zealand in 2013.