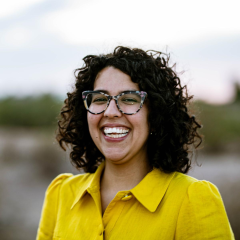 Born and raised in Arizona, Anita Huizar-Hernández's teaching and research focus on the ways literature, film, and other forms of expressive culture have consolidated or challenged myths about Arizona, the West, and the U.S.-Mexico borderlands. Her first book, Forging Arizona (Rutgers, 2019), examines these themes through a bizarre nineteenth-century land grant scheme in which a con artist named James Addison Reavis falsified archives around the world to present his wife as the heiress to a spurious Spanish land grant with the intention of claiming ownership of a substantial portion of the newly-acquired Southwestern territories. Drawing from a wide variety of sources including court records, newspapers, fiction, and film, Forging Arizona argues that the creation, collapse, and eventual forgetting of Reavis’s scam reveal the mechanisms by which narratives, real and imaginary, forge borders.

Huizar-Hernández's current book project examines writing produced by the Cristero diaspora in the United States, a group of Catholic Mexican exiles who fled across the border as a result of the Mexican Revolution's secularization project. Huizar-Hernández is also engaged in multiple collaborative digital public-facing projects. These projects include: