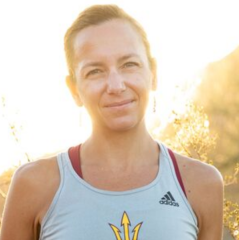 Victoria Jackson is a sports historian and Clinical Assistant Professor of History in the School of Historical, Philosophical, and Religious Studies at Arizona State University. Jackson writes and speaks about the intersection of sport and society, exploring how the games we play (and watch) tell us much about the communities – local, national, and global – in which we live. Her writing has appeared in the Los Angeles Times, Washington Post, Boston Globe, The Chronicle of Higher Education, Slate, Letras Libres (Mexico), El Universal (Mexico), Epoca (Brazil), The Independent (UK),The Athletic, and Sportico. Jackson has appeared on 60 Minutes to discuss American college sports and is a frequent podcast, radio, TV, and documentary film commentator on sport and society. She brings a historian's eye to the project of designing future sports systems that are inclusive, equitable, and just. She is writing a book on the past, present, and future of college sports.

Jackson teaches a package of sports history courses, which forms part of an interdisciplinary, liberal arts undergraduate certificate in “sports, cultures, and ethics." She is affiliated faculty with the American Studies program in the School of Social Transformation and a Global Sport Scholar with the Global Sport Institute at ASU. She also serves on advisory boards of nonprofits with missions focused on sport and social change.

She holds MA and PhD degrees from Arizona State University, and a BA from the University of North Carolina at Chapel Hill, where she graduated summa cum laude and joined Phi Beta Kappa. Jackson was also a cross country and track and field athlete for UNC and ASU, Pac-10 conference champion at 5,000 meters, NCAA national champion for the Sun Devils at 10,000 meters, and a professional runner endorsed by Nike. Jackson works with Sun Devil Athletics on a variety of history, education, and leadership initiatives with athletes, coaches, administrators, and the greater Sun Devil community. She would like for her ASU school record in the 5,000 meters to be broken as soon as possible.