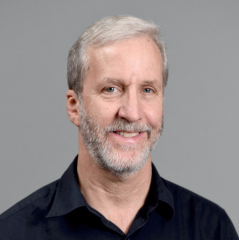 Michael McBeath does research in the emerging area combining psychology, engineering, and perception-action. He majored in both psychology and electrical engineering for his bachelor’s degree from Brown University, received a master's in electronic instrumentation from the University of California, and earned his doctoral degree from Stanford University in psychology with a minor in electrical engineering. Parallel to his academic career, he worked as a research scientist, both at NASA - Ames Research Center, and later at the Interval Corporation, a technology think tank funded by Microsoft co-founder, Paul Allen. McBeath has been a faculty member in the Department of Psychology at Arizona State University since 1998, where he is also adjunct faculty in Kinesiology, Neuroscience, Life Sciences, Animal Behavior, Electrical Engineering, the School of Arts, Media, and Engineering, and ASU’s Global Sports Institute. His research has been funded by grants from the Interval Corporation, the National Science Foundation and the Office of Naval Research.

McBeath’s work focuses on computational modeling of perception-action in dynamic, natural environments, with specialties that span sports, robotics, music, navigation, animal behavior, and multisensory object perception. His most widely known work is on navigational strategies used by baseball players, animals, and robots. His baseball interception research was published in the journal, Science, his dog Frisbee study was made fun of on Saturday Night Live, and his autonomous ball-catching robot was selected by the New York Times Magazine as one of its ideas of the year. And he plays a mean harmonica.