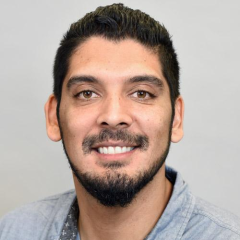 César I. Torres is a professor of chemical engineering in the School for Engineering of Matter, Transport and Energy at Arizona State University. He is also graduate faculty in environmental engineering, biological design and sustainability.   The Torres Lab, part of the Swette Center for Environmental Biotechnology, focuses on microbiological technologies that provide energy or high value chemicals to society. Our goal is to make use of microorganisms and their complex enzymatic machinery to carry out reactions that are difficult or impossible through any other known chemical route. Our main research topics are microbial electrochemistry, fermentations, and photosynthetic production of biofuels.

Anode-respiring bacteria (ARB) are capable of utilizing an anode as a solid electron acceptor, while oxidizing a variety of electron donors (substrates). Thus, ARB can be used to convert organic compounds or wastes into an electrical current. This current can in turn be used for a variety of electrochemical reactions, generating products of interest. The current produced by ARB can also be used as an analytical signal that monitors the respiration rate of ARB. Through this concept, we use ARB in the lab to understand kinetics of microbial metabolism.

All the energy on the planet comes from the sun. Our most direct route to produce renewable biofuels is through the use of photosynthetic microorganisms. Our lab focuses on collaborations with various research teams to optimize photobioreactor designs and processes. Our goal is to create optimal conditions in the reactors so that microoganisms maximize biofuel production. Solar energy is the true renewable source of energy in this planet. The Torres Lab focuses on optimizing processes to grow photosynthetic organisms that can produce biofuels. We focus on cyanobacteria and algae, understanding the nutrient requirements in order to maximize biofuel production. At the same time, we design new processes that can lead to a more efficient production and harvest of the biofuel. We also focus on the growth of these microorganisms in biofilms and with the use of wastewater as nutrient source.

Microbial Fermentations and Reductions for Bioenergy

Microorganisms are known to perform many complex reactions that are difficult to catalyze through chemical processes. Many of these reactions can lead to biofuels that are of great importance to society. The Torres Lab looks to optimize known processes that involve microorganisms, focusing on fermentations and reductions. These processes are common for ethanol production using yeasts to biogas production from wastewater sludge. In all these processes, the balance between thermodynamics, kinetic rates, and microbial growth play an important role in the process feasibility. We focus on designing novel processes using known microbial pathways, while searching for new pathways that can lead to new ways to produce biofuels.

The Torres Lab focuses mainly on fundamental and applied research related to microbial electrochemistry. This young field of research bloomed about a decade ago when we learned that microbes can electrically connect to an electrode, producing an electrical current. The electrical current produced is actually part of their metabolic respiration, as the anode serves as their local electron acceptor (thus, we call them anode-respiring bacteria, ARB). Today, there are still many unknowns regarding the mechanism that allows ARB to transport electrons from thick biofilms, sometimes over 100 micrometers, to the electrode. Despite these unknowns, many technologies have been proposed using ARB in microbial electrochemical cells (MXCs). MXCs can be used to convert complex organic compounds, such as wastes, into electrical power or valuable products. Our group tackles both the fundamental understanding of ARB biofilms, focusing on transport processes, and the development and optimization of MXC technologies. Currently, we have four major research efforts:

Most of the research in microbial electrochemistry so far has focused on two main microorganisms: Geobacter sulfurreducens and Shewanella oneidensis. While these are excellent model microorganisms to study anode respiration, there is a need to study other ARB. Our group has focused on identifying and characterizing new ARB, including thermophiles (~ 60 deg C)Thermincola ferriacetica and Thermoanaerobacter spp., alkalophileGeoalkalibacter ferrihydriticus, and halophile Geoalkalibacter subterraneus. But the search for ARB continues! Our goal is to focus on those ARB that bring novel metabolic capabilities that can be used in MXC applications.

Fundamental Studies on Electron and Proton Transport in Anode Bioilms

The unique phenomenon of extracellular respiration in biofilm-forming ARB requires efficient transport of electrons and protons out of the biofilm. We apply advanced electrochemical techniques such as cyclic voltammetry and electrochemical impedance spectroscopy to study these transport processes in detail. We especially focus on how accumulation of electrons and protons inside biofilms affects the energy metabolism of ARB. We also use, in our studies, novel electrode geometries wherein electron and proton gradients can be influenced. We combine the use of electrochemical techniques with powerful microscopic techniques to understand these gradients. We use the information obtained through such studies to develop mathematical models that accurately describe and predict the current generated by ARB biofilms under a range of conditions.

ARB participate in syntrophic interactions with various microbial trophic groups in an anaerobic microbial food web in order to achieve high efficiencies of electron capture from complex organics. Competing microbial processes such as methanogenesis, sulfate reduction, and denitrification can drive electrons away from anode respiration. Source of inoculum, pH, degree of substrate complexity are some of the key variables that influence the microbial ecology of anodes. We focus on unearthing the microbial ecology of complex organic substrates from globally diverse environmental inocula under different environmental conditions. Suppression of undesirable microbial sinks such as methanogenesis and promotion of desirable microbial partners such as homoacetogenesis is another central research theme. Molecular microbial ecology tools from the Krajmalnik-Brown lab aid in the characterization along with microscopic techniques. We strive to employ beneficial ecological management in microbial electrochemical cells through sound engineering and microbiological practices.

Optimization of MXC Processes Towards Scale-up

The electrical current produce by ARB can be used for many applications, such as power production (microbial fuel cell), hydrogen production, and other chemicals. Our research focuses on optimizing processes that can have near-term impacts in society, while envisioning new processes that can be developed based on new discoveries. For example, through the study of thermophilic ARB, we are optimizing a process to produce H2 from cellulosic biomass taking advantage of efficient cellulosic degrading microbes at this temperature. We are also optimizing a process to produce hydrogen peroxide at the cathode of a microbial fuel cell fed with wastewater. The hydrogen peroxide can then be used to further treat and disinfect the wastewater stream. Through the fundamental knowledge obtained in other research efforts discussed above, we develop mathematical models that allow us to predict and optimize these new processes to achieve economic feasibility.