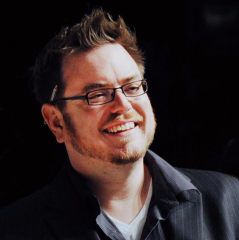 Jake Pinholster is the associate dean for enterprise design and operations in the Herberger Institute for Design and the Arts at Arizona State University and head of graduate programs in interdisciplinary digital media and performance design. As a designer, Pinholster’s efforts have centered on projection and media design and technology for performance. He is an associate artist with Les Freres Corbusier, the resident video designer for the David Dorfman Dance company, and a contributor to Live Design Magazine. His professional media/projection design credits include The Pee Wee Herman Show (Broadway/HBO Special), Carrie Fisher: Wishful Drinking (HBO Special), Current Nobody (Woolly Mammoth, La Jolla Playhouse), Hoover (La Jolla Playhouse), Bloody Bloody Andrew Jackson (Center Theatre Group), Heddatron (HERE Arts Center) and many other productions at off-Broadway, regional, and academic venues. Much of his recent activity has been as a creator/director for immersive performance in unusual venues: site-specific installations, creation of performance in high end 3D planetariums, and the creation of a 360deg immersive performance/media dome. As an educator and administrator, Pinholster has been involved in a number of long-term initiatives that fuse technology, interdisciplinarity, and curricular innovation, and he has been an invited speaker on these topics at the National Association of Schools of Theatre, the Leadership Institute of the Association for Theatre in Higher Education and LDI.