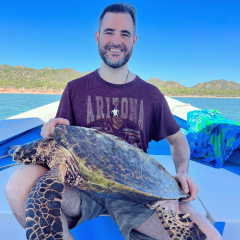 Jesse Senko is an Assistant Research Professor and Senior Sustainability Scientist at Arizona State University. His research links ecology and animal behavior with management and policy to address dynamic coastal conservation challenges of the 21st century. He is particularly interested in innovative approaches that protect vulnerable marine megafauna (e.g. sea turtles, sharks, and marine mammals) as well as safeguard the health and wellbeing of coastal fisheries and the billions of people who depend on them. Senko partners with scientists, fishers, engineers, NGOs, and governments to develop, test, and implement scalable conservation solutions that reduce bycatch of protected species (especially sea turtles) while ensuring coastal livelihoods. His research has been published in leading ecology, conservation, and policy journals as well as featured in CNN, The New York Times, Reuters, National Geographic, Smithsonian Magazine, The Economist, NPR, The Guardian, USA Today, Bloomberg, Forbes, Nature, Science, and other major international outlets. An avid recreational fisher who grew up in New England, Senko majored in fisheries and wildlife sciences at the University of Connecticut, received his master's in wildlife ecology and conservation from the University of Florida, and earned his Ph.D. in biology from Arizona State University. My research and teaching program trains the next generation of conservation leaders while leading transdisciplinary investigations to develop and test conservation solutions that protect marine megafauna as well as coastal fisheries and the billions of people who depend on them. I lead field and lab based research projects in the Pacific and Atlantic Ocean regions: