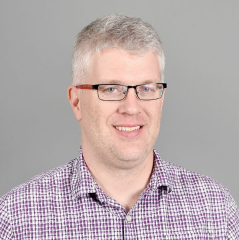 Earning his doctorate from Purdue University’s Program in American Studies, Lee Bebout is a professor of English at ASU, where he is affiliate faculty with the School of Transborder Studies and the Program in American Studies. His articles have appeared in Aztlán, MELUS, Latino Studies, and other scholarly journals. His book, "Mythohistorical Interventions: The Chicano Movement and Its Legacies" (Minnesota 2011), examines how narratives of myth and history were deployed to articulate political identity in the Chicano movement and postmovement era.  His second book, "Whiteness on the Border: Mapping the US Racial Imagination in Brown and White" (NYU 2016), examines how representations of Mexico, Mexicans, and Mexican Americans have been used to foster whiteness and Americanness, or more accurately whiteness as Americanness.