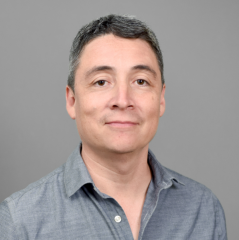 Andres Torres-Vives is an award-winning filmmaker and visual artist whose films and work have played at numerous festivals and exhibitions. Along with being a Fulbright and Jacob K. Javits Fellow, Torres-Vives’ work has garnered significant awards from the National Endowment for the Arts and the California Arts Council, along with multiple foundations and organizations. He has aired work for the BBC, PRI, and KCET Los Angeles and his last short film ISTINMA, opened the Native Cinema Showcase by the Smithsonian National Museum of the American Indian. Along with his film work, Torres-Vives has worked extensively with marginalized and Native communities, including a full-gallery show at SPARC Gallery in Los Angeles of photography and video by incarcerated minors and a filmmaking residence at Pine Ridge Indian Reservation in South Dakota with the First Peoples Fund. He is currently leading a project involving augmented reality (AR) memorials for children killed by firearms and is a collaboration with engineering and criminology faculty and graduate students. Torres-Vives received his MFA in Directing and Producing from the UCLA School of Film and Television and is Head of the Film Directing Track at The Sidney Poitier New American Film School and Academic Director of Film Spark L.A. at Arizona State University (ASU).