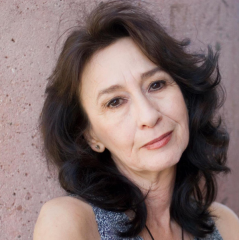 Angela Giron is the Program Director of the Master of Liberal Studies Program and a Clinical Assistant Professor at Arizona State University since 2009.  She has developed numerous Humanities courses for the MLSt program with a strong focus on film content.  Angela presented her researched paper, “The Missing – Geriatric Female Sexuality in Film Content & Cinematography” at the Film-Philosophy conference at St. Anne’s College, Oxford University, England, in the summer of 2015. Later she attended further Film-Philosophy conferences that are of high merit in the UK and on the European continent.

In Spring 2018 Angela developed a course on Film-Philosophy for the ASU MLS program.  Ms. Giron has worked professionally in Theatre and Film out of Chicago, Los Angeles, Montreal and Toronto, Canada.  She performed her most recently authored play, Nitza – A Cuban Flavor at the United Solo Festival, NYC, in October 2016.  She is long time member of the Screen Actors Guild and an ASU Faculty Affiliate of the Center for Film, Media and Popular Culture as well as a member of the ASU Faculty Women of Color Caucus.  She has moderated post film discussions for both Arizona Humanities and collaborations with the ASU Center for Film, Media and Popular Culture.  Lastly: Angela Girón's short story, “Slasher - Story of a Teenager” was published in the anthology, "Fearless: Women’s Journey to Self-Empowerment" edited by Cat Pleska, Mountain State Press, Inc., 2019.

Issues on Borders and Migrations

Film as a philosophical and socialogical tool

Theatre of the Americas