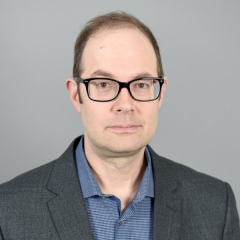 Peter J. Schmelz is professor of musicology at Arizona State University. His areas of expertise include 20th and 21st century music; Ukrainian, Russian, and Soviet music, particularly Shostakovich, Sylvestrov, and Schnittke; music in the Cold War; popular and experimental music; film music; music and politics; and sound studies. His two recently published books are: Sonic Overload: Alfred Schnittke, Valentin Silvestrov, and Polystylism in the Late USSR (Oxford University Press, 2021), and Alfred Schnittke's Concerto Grosso no. 1 (Oxford, 2019). Professor Schmelz is currently completing two other book projects, one called Intimate Histories of the Musical Cold War: A Ukrainian Composer, Conductor, and Musicologist Struggle for Independence, Recognition, and the Avant-Garde in the 1960s; the other is titled Some Combinations of Freedoms and Passions: Soviet Experimental Music in the 1980s (on the Ganelin Trio, Sergey Kuryokhin and Pop Mekhanika, Valentina Ponomareva, Sainkho Namchylak, and the group Auktsyon).

Professor Schmelz received a National Endowment for the Humanities Fellowship in 2011. He has received three awards from ASCAP:  his first book, Such Freedom, If Only Musical: Unofficial Soviet Music during the Thaw (Oxford, 2009), won an ASCAP Deems Taylor Award in 2010; his article on Silvestrov's Symphony no. 5, published in Journal of Musicology, received an ASCAP Virgil Thomson/Deems Taylor Award in 2015; and his third book, Sonic Overload: Alfred Schnittke, Valentin Silvestrov, and Polystylism in the Late USSR received an ASCAP Virgil Thomson/Deems Taylor Award in 2022. In Fall 2017 he was Anna-Maria Kellen fellow at the American Academy in Berlin. In 2019 he was named a Guggenheim Fellow. Professor Schmelz is series editor for Indiana University Press's Russian Music Studies; he edited the Journal of Musicology from 2014-18. He previously taught at the University at Buffalo (SUNY), and at Washington University in St. Louis, where he also served as chair of the music department.