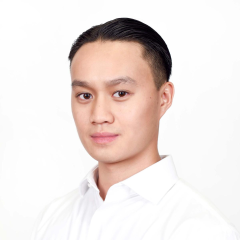 In April 1998, Brandon Lin began his life in Phoenix, Arizona. After moving with his family to Taipei City, Taiwan in March 2000, Lin learned how to read and write English and Mandarin Chinese at Dalton School. This early study in both English and Chinese characters became a critical part of his later life. Lin became fascinated with drawing and signs after moving back to the desert in July 2003. Lin curiously explored both fascinations in The Visual Communication Design Program at Arizona State University, while simultaneously gaining sensitivity to color theory and typography. After earning a Bachelor of Science in Design in May 2020, he has been working with graphic design students at The Design School. He hopes to carefully inspire students to value process, and increase their sensitivity in all areas of design.