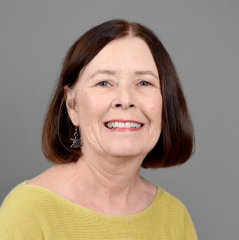 Brenda Hogue is a virologist who studies how coronaviruses, a large family of RNA viruses, that includes severe acute respiratory syndrome (SARS) and Middle East respiratory syndrome (MERS), assemble at intracellular membranes and their interplay with host cells that ultimately results in disease.

Professor Hogue and her team use state-of-the-art molecular approaches, virus reverse genetic systems and bioimaging, including confocal microscopy, cryo-electron microscopy (-EM) and X-ray free electron lasers (XFELs), to address structure/function and mechanistic questions about how coronaviruses assemble their proteins and RNA genome to form infectious particles. The lab studies a class of proteins known as viroporins. Ongoing research is directed at understanding the role of coronavirus viroporins in virus assembly and their contribution to development of inflammation during infection. The overall goal is to use information gained from the research to identify targets and use structure-based design for therapeutic and vaccine development.

A major focus of the Hogue Lab research is directed toward understanding the molecular details of assembly and release of enveloped RNA viruses, using coronaviruses (CoV) as the major model. The lab focuses to a large extent on structure-function studies. CoVs acquire their envelope at the endoplasmic reticulum Golgi intermediate compartment (ERGIC) and are released through interplay with the cellular secretory pathway. Interactions between viral and cellular proteins are explored, the use of vesicular trafficking and assembly at ERGIC membranes are studied. A combination of genetic, biochemical, structural and imaging approaches is used to understand functions of the viral structural proteins. The lab's research uses of state-of-the-art confocal microscopy of fixed and live cells, cryo-electron microscopy (-EM), correlative light electron microscopy (CLEM), free electron lasers (XFELS), ion channel analysis, proteomics, reverse genetic manipulation of infectious genomic clones to study the viral proteins, their subcellular localization, transport within cells during assembly of wild-type and genetically altered VLPs and viruses and structural studies of both viruses and proteins. The lab is involved in a number of cross-disciplinary collaborations. We collaborate with engineers to study ion channel activity of CoV proteins that are important for virus assembly. Single particle analysis and structural studies with nanocrystals are being done at the XFEL facility, Linac Coherent Light Source, (LCLS), at Stanford University and the European XFEL that recently opened in Germany. XFELs produces ultrafast pulses of X-rays millions of times brighter than even the most powerful synchrotron sources. We are helping develop the technology for three-dimensional structure at atomic resolution of viruses and viral proteins, as well as future planning for time-resolved studies with these. The laboratory is also working on determining the structures of several coronavirus envelope proteins using the relatively new technology, crystallization in lipid cubic phase (LCP). We are particularly interested in a family of proteins known as viroporins. Many medically important viruses, including coronaviruses, encode and express viroporins. We are studying the role of coronavirus viroporins in virus assembly and also their role in development of inflammation during infection.