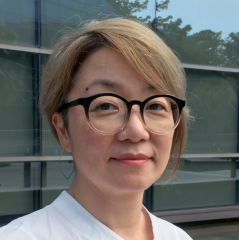 Kristy H.A. Kang is a practice-based researcher whose work navigates the triangulation of place, geographies, and cultural memory. She is an associate professor of urban media art and design at Arizona State University's Herberger Institute for Design and the Arts holding joint appointments in the School of Arts, Media and Engineering, the Design School, and the Media and Immersive eXperience (MIX) Center. Prior to joining ASU, she was an assistant professor at the School of Art, Design and Media at Nanyang Technological University, Singapore and received her doctorate in media arts and practice at the School of Cinematic Arts, University of Southern California. Her research interests combine urban and ethnic studies, mapping, and emerging media arts to visualise cultural histories of cities and communities. Her works have been presented at the Gwangju Design Biennale, South Korea; the Centre for Contemporary Art, Singapore; the Getty Research Institute, Los Angeles; the Center for Art and Media, Karlsruhe; and the Jewish Museum, Berlin, among others and received the Jury Award for New Forms at the Sundance Online Festival.

Kang’s research projects include "The Seoul of Los Angeles: Contested Identities and Transnationalism in Immigrant Space", an interactive online cultural history that focuses on Koreatown in Los Angeles (http://www.seoulofla.com), and a collaboration with the Urban Redevelopment Authority “City Stories: Mapping the Spatial Narratives of Singapore’s Landscapes” (http://citystories.sg), a platform for digital placemaking that explores the multicultural identity and evolution of two of Singapore’s oldest streets in the historic district known as Chinatown. She was co-organizer of an international symposium on mediated public space “Emergent Visions: Adjacency and Urban Screens” (http://www.emergentvisions.net) and is Advisory Board Member for the Media Architecture Biennale 2023. Her publications include “We Are Here: City Signs and Maps in Ethnic Placemaking” co-authored with Annette M. Kim for the Journal of the American Planning Association (2022), a book chapter for the Routledge Companion to Media and the City “’City Stories’: Digital Placemaking and Public History in Singapore” (2022), and “Interfaces and Intentionalities: Adjacent Practices of Urban Media Art in Singapore” published in a special issue on Urban Interfaces in Leonardo Electronic Almanac (2019).