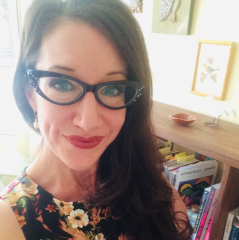 Rosemarie Dombrowski (RD) is the inaugural Poet Laureate of Phoenix, AZ and the director of Revisionary Arts, a nonprofit that facilitates therapeutic poetry workshops for vulnerable populations and the community at large. She’s the founding editor of both rinky dink press (a publisher of micro-collections of micro-poetry) and The Revolution (Relaunch), an award-winning, creative resurgence of the official newspaper of the National Woman’s Suffrage Association.

RD was the co-founder and faculty editor of Write On Downtown (2007-2022), an annual publication dedicated to showcasing the work of Phoenix creatives. She's currently the founding editor of ISSUED: stories of service, an ASU-sponsored journal of creative expression by veterans and military-affiliated people, as well as the faculty editor of Grey Matter, the medical poetry journal at the University of Arizona Biomedical campus-Phoenix.

She’s published three collections of poetry including The Book of Emergencies (Five Oaks Press, 2014), a lyrical ethnography of the culture of nonverbal Autism, and The Cleavage Planes of Southwest Minerals [A Love Story], winner of the 2017 Split Rock Review chapbook competition.

She’s the recipient of an Arts Hero Award, a Great 48 Award, a Women & Philanthropy grant, and Fellowships from the Lincoln Center for Applied Ethics and the Academy of American Poets. In 2022, she gave a TEDx talk entitled “The Medicinal Power of Poetry. That same year, she was named Outstanding Speaker by Arizona Humanities, the state branch of the NEH.

Currently, she’s an Assistant Professor of Practice at U of A Biomedical (Phoenix) and a Principal Lecturer at Arizona State University's Downtown Phoenix campus, where she specializes in medical humanism/medical poetry, literature of the marginalized, and journal editing/production.

RD's research focuses on the history of radical/alternative print culture in America, with emphasis on acts of curatorial agency by women including suffrage journals, Emily Dickinson’s fascicles, little magazines, and riot grrrls zines.

Her applied research is situated within the Medical Humanities and includes the re-examination of canonical American poetry through a medical-biographical lens, the implications and impact of both patient-centered and practitioner-centered poetry, and the application of poetry as a complementary therapy in both clinical and community settings. Accordingly, her poetry resides at the intersection of disability (Autism), medicine, and trauma, and her community-facing programs focus on poetic approaches to community-building and healing.

RD's other research interests include poetry of the incarcerated, war poetry/poetry of witness, and poetry of the historically marginalized -- from the narrative content to its medicinal value and impact.

▪ Poet Laureate Fellow, the Academy of American Poets, May 2020.

▪ Finalist, The Fourth River Review Folio Contest for Poetry, May 2019.