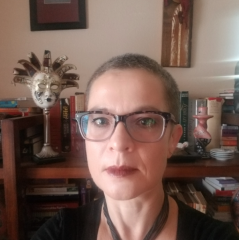 Julie Paulesc is multi-year Senior Lecturer and the coordinator of the Romanian Language Program. Paulesc has been teaching Romanian language and culture at Arizona State University since 2003. She also serves as the advisor of the Romanian Students’ Association at ASU, Barrett Honors faculty and the associate director of the Central European Cultural Collaborative. Her research interests include cultural studies, language and identity, migration studies and Eastern European film.