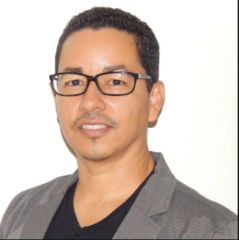 Caro holds a Ph.D. in interdisciplinary Spanish (Critical Cultural Studies 50% and Spanish Applied Linguistics 50%) from Arizona State University, where he has served as coordinator of in-person and hybrid Spanish Language courses at the Tempe Campus, as well as Spanish faculty and course coordinator in the Spanish for the professions program at the downtown Phoenix campus. While in his doctoral studies, Dr. Caro received the ASU Graduate Excellence Teaching Award and served as chair of Linguistics-Literature-Cultural Studies Graduate Student conferences. He also holds an MA in Peninsular/Latin American literature and cultures from the University of Arkansas. In addition, he obtained specialization degrees (diplomados) in Spanish/English for Specific Purposes (Colombia) and English as a second language/culture from Oxford and Cambridge Universities (England). Likewise, Dr. Caro holds a BA (licenciatura) in Bilingual (Spanish-English) Education and Foreign Language Pedagogy from Universidad del Atlántico (Colombia). Likewise, Dr. Caro has done interpretation and translation work in a variety of professional contexts and in the community in Colombia, Spain, Mexico, the United States, England, and Canada.

Dr. Caro has many years of teaching experience at the undergraduate and graduate levels in Colombia, Mexico, Spain, the United States, and England, where he has, too, worked in leadership positions. His teaching and research interests include all levels of Spanish language and culture, Spanish for specific purposes, Second Language Pedagogy, Spanish/Latin American cultural studies, Latin American/Colombian literature and cinema, translation/interpretation, and digital humanities. He has published research articles, critical book and film reviews in (inter)national journals such as Revista de Estudios Colombianos, Chasqui: Revista de Literatura Latinoamericana, Hispanic Issues, Cuadernos de ALDEEU (Spanish Professionals in America), the Rocky Mountain MLA Journal, and encyclopedic entries in The Greenwood Encyclopedia of Daily Life Through History, Gender and Identity Worldwide and The Cambridge Encyclopedia of Stage Actors and Acting.

Dr. Caro has a significant record of research presentations in (inter)national conferences and congresses, such as the Rocky Mountain MLA Association, the Latin American Studies Association (LASA), International Association of Colombianists, International Congress of Caribbean Literatures and Cultures, Spanish Professionals in America (ALDEEU), and the International Language for Specific Purposes/CIBER conference. He has been a special guest speaker in the Humanities Lecture Series at the ASU Downtown campus, where he has presented about Latin American Cinema and the Human Condition, the (in)visibility of "otherness" in Contemporary Latin American Cinema, and, on Corruption, Violence and Human Rights in Venezuela. Similarly, he has been an invited guest speaker on "Needs Analysis, Experiential Learning in the Second/Foreign Language-Culture classroom" at the Colombian-American Center in Barranquilla. Moreover, Dr. Caro has directed and taught Spanish Summer programs abroad in Mexico and Spain respectively. His service to the profession includes being guest editor of Revista de Estudios Colombianos, review editor of Hispania (a journal devoted to the teaching of Spanish and Portuguese) and of Letras (Revista de Investigaciones de la Facultad de Letras y Ciencias Humanas de la Universidad Nacional Mayor de San Marcos, Lima, Peru). He has, as well, served as General Secretary of the Association of Colombianists, vice-president, and past president of the Rocky Mountain MLA, where he received the Excellence in Leadership and Service Award.

Continues to do research on:

For a variety of Honor Contracts, has mentored students in the ASU Barrett Honors College.