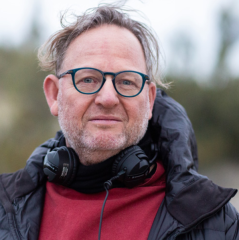 FraKture for Garth Paine is a composer, scholar and acoustic ecologist.  He crosses art-science boundaries with his community embedded work on environmental listening and creative place-making in addition to his environmental musical works and performances.  His research drives toward new approaches to acoustic ecology and the exploration of sound as our lived context including the application of VR in health.

In 2018 he was researcher/artist in residence in Europe at IRCAM (Centre Pompideau) and Center for Arts and Media (ZKM). He continues to collaborate on research at IRCAM.

His passion for sound as an exhibitable object has given rise to interactive environments where the sonic landscape is generated through gesture, presence and behavior and several music scores for dance works using realtime video tracking and bio-sensing and musical compositions that have been performed in Australia, Europe, Japan, USA, South America, Hong Kong and New Zealand and, in 2014, Korea, Macedonia, France, and UK.

Paine's current research centers around the Listen(n) Project, on acoustic ecology project that focuses on field recording and community building. He co-directs the Acoustic Ecology Lab (AELab@ASU) with Professor Sabine Feisst, which he established in 2016.

He has a long history of composing musical works from his field recordings and engaging in environmental work through sound. Recent examples include the Site Works project at Bundanon, Australia for which he composed the work Presence in the Landscape and his work Becoming Desert for the Listen(n) Symposium concert in 2014.

Paine is internationally regarded as an innovator in the field of interactivity in experimental music and media arts. He is an active contributor to the International NIME conference wher he was keynote speaker in 2016. He is on the editorial board of Organised Sound Journal, which he has also guest-edited on several occasions. He lead the Taxonomy of Interfaces/Instruments for Electronic Music performance (TIEM) projects with partners McGill University and the Electronic Music Foundation, resulting in on online database of current practice and opening up the discussion of a taxonomy for classification of new instruments to assist research in the field.

Garth's work can be found at Activated Space

Rainforest Remix – a performance project in partnership with Rainforest Partners and the UN +SocialGood climate campaign to create an immersive musical performance experience of rainforest environments for SxSW Eco (Oct/15).  Rainforest Remix will be featured at Texas Earth Day 2016 – this project seeks a broad community engagement with environmental awareness by leveraging the popularity and cultural capital of celebrity DJ’s.

Forrest for flute and live electronics composed for the President’s Showcase (Fall 2014) and also performed at President’s Weekend (Nov’15), the at the Launch of the Biomimicy center (2015). Embodiment and Agency in interactive performance

I direct the Acoustic Ecology Lab at ASU

Paine, G. (2015). “Interaction as Material: the techno-somatic dimension”. Organised Sound, 20(1), 82-89.  This was an invited article for the twentieth anniversary edition of the Organised Sound Journal from CUP.

The International Conference on New Interfaces for Musical Expression (NIME)

The International Workshop of Movement and Computing (MOCO)