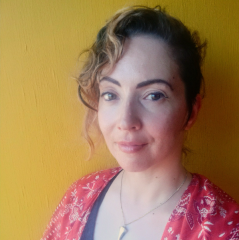 Lauren Hayes is a musician, improviser, and sound artist who builds and performs with hybrid analogue/digital instruments. She is Associate Professor of Sound Studies within the School of Arts, Media and Engineering at Arizona State University where she founded the research group Practice and Research in Enactive Sonic Arts (PARIESA). She holds degrees in Mathematics and Philosophy (MA), Digital Composition and Performance (MSc), and Creative Music Practice (PhD), all from the University of Edinburgh, UK.

Her research centers around embodied and enactive music cognition, enactive approaches to digital instrument design, and haptic technologies, and has been published in major journals in her field (Contemporary Music Review, Organised Sound, Computer Music Journal). She was recently invited to contribute to the first reader on New Interfaces for Musical Expression (NIME), published by Springer. Her work on embodied music education, pedagogy, and technology for children won her the Best Paper Award at the International Computer Music Conference in 2016, and was recently profiled by Cycling ’74.

As a performer and improviser, Hayes explores new strategies for live electronic performance by investigating the performer's physical relationship with the digital realm. Her music lies somewhere between free improv, experimental pop, techno, and noise, and she regularly performs internationally, including at major electronic music festivals such as Moogfest (USA) and Norberg (Sweden). Commissions include EFG London Jazz Festival (2015); four sold-out solo performances for Sonica Festival (2016) in Hamilton Mausoleum, UK, famous for holding the record for the longest echo of any man-made structure; a live BBC Radio 3 broadcast performance for hcmf// as part of its International Showcase (2017); and a co-commissioned work by hcmf// and University of Huddersfield's FluCoMa project (2019).

Hayes composes haptic music that can be experienced as vibration throughout the body, and has given multisensory workshops for various groups, including those with sensory impairment, learning difficulties, and autism. Her person-centered approaches often result in custom built instruments designed specifically for a user. Over the last decade, she has developed bespoke haptic technologies, which has led to current research projects which include investigating the aesthetics of touch, and improving music perception for people who experience hearing loss. She was recently invited to share this research at Ableton's LOOP festival in Berlin (2017).

Hayes has served as a programme committee member and reviewer for several major conferences including NIME, ICMC, MOCO, Eurohaptics, DIS, and was Paper Chair for Tangible, Embedded, and Embodied Interaction (TEI) in 2019. She also regularly reviews for journals including Leonardo and IEEE Transactions on Haptics, and adjudicates for awards and festivals, including Electroacoustic Improvisation Symposium (EIS 2018) and the PRS Foundation’s Oram Awards (2017-19), which recognise the achievements of women working in sound and music. In 2016, she founded the AME Listening Group, which hosts listening, workshop, and performance opportunities for students throughout ASU. She is an associate of the New BBC Radiophonic Workshop and Director-At-Large of the International Computer Music Association (ICMA).

In 2016, I founded the research group: Practice & Research in Enactive Sonic Art (PARIESA).

Please refer to my Google Scholar profile for full list.