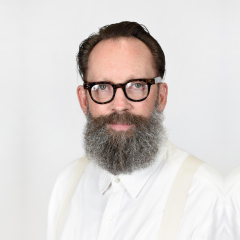 Born in 1965 on the Island of Manhattan, Andrew Weed moved with his family to the Sonoran desert at the age of ﬁve. The formal silence of the desert was as critical to his early development as it is today.

In 1988, upon receiptof his bachelor of ﬁne arts in graphic design from Arizona State University, Weed traveled to Amsterdam where he interned at BRS Premsela Vonk, a multi-disciplinary design studio now called Eden. His active drawing for the wings of a grifﬁn symbol continue to identify the Vrije Universiteit, Amsterdam today.

Drawing is his ﬁrst language. Along with areas of study like color and typography, the language further developed from 1990-93 at the Basel School of Design/Switzerland. These slow developments over time have lead to a fascination for describing complex ideas with simple forms and materials. This fascination is visible in every aspect of his life from his practice to his research to his work with students.

From 1995-99, he practiced graphic design in Seattle with clients such as the Center on Contemporary Art, On the Boards, and Photodisc. Since 1999, his award-winning practice has continued in the Sonoran desert. His work has been exhibited in Europe, Mexico and the United States.

He has lectured nationally and internationally on his research in signs at the invitation of organizations such as Microsoft and the European Academy of Design, Barcelona. The research has also been published by Journals such as Design Issues, Cambridge and Eye, London.

Weed has been inspiring students from The Design School at Arizona State University to be speciﬁc, use nothing, and look since 1999. During this time he has also given many workshops across North America and beyond. In 2012, his students’ color work from Centro Design School, Mexico City was awarded the Premio Quórum Grand Prize.