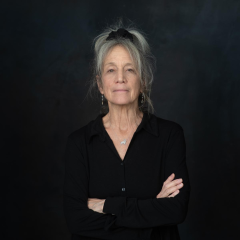 Liz Lerman is a choreographer, performer, writer, educator and speaker, and the recipient of numerous honors, including a 2002 MacArthur Genius Grant, a 2011 United States Artists Ford Fellowship in Dance, and a Deutsch Fellow. A key aspect of her artistry is opening her process to various publics from shipbuilders to physicists, construction workers to ballerinas, resulting in bothresearch and outcomes that are participatory, relevant, urgent, and usable by others. She founded Liz Lerman Dance Exchange in 1976 and cultivated the company's unique multi-generational ensemble into a leading force in contemporary dance until 2011.

She was an artist-in-residence and visiting lecturer at Harvard University in 2011, and her most recent work, "Healing Wars," toured across the US in 2014-15. Lerman conducts residencies on Critical Response Process, creative research, the intersection of art and science, and the building of narrative within dance performance at such institutions as Harvard University, Yale School of Drama, Wesleyan University, Guildhall School of Music and Drama, and the National Theatre Studio, among others. Her collection of essays, "Hiking the Horizontal: Field Notes from a Choreographer," was published in 2011 by Wesleyan University Press and released in paperback in 2014. In 2016, Lerman was named the first Institute Professor at the Herberger Institute for Design and the Arts at Arizona State University, where she is building a new ensemble lab focused on creative research.