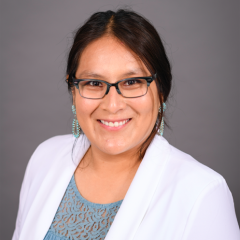 Her research can be encapsulated in two main foci: Indigenous population genetics and bioethics. In particular, she focuses on bioethical engagement of Indigenous communities in genomics and data science to build trust. As a whole, her interest is in integrating genomic and data approaches to assess Indigenous variation contributing to health inequities.

She began her research career at the laboratory bench, where she developed and patented a combined targeted ultrasound imaging and chemotherapeutic drug delivery device for treating early metastases in cancer. Upon seeing the disparities in emerging genomics technologies, she switched fields to genetic epidemiology, public health, and bioethics. Her first Master of Arts in Bioethics at Arizona State University focused on the cultural implications of genetics in Native American communities. She added biostatistical knowledge and computational programming in large genomics datasets during her second Master’s in Public Health (genetic epidemiology) at Vanderbilt University, where she studied disparities in uterine fibroids in African American women. She has co-led an ongoing longitudinal genetics study in a North Dakota Tribal community. This project serves as one of few examples of community-based participatory research involving genetics in an Indigenous tribal nation.

Her research and educational endeavors have received increasing national and international media attention as scientists worldwide are understanding the importance of equitable, community-based engagement models and the importance of Indigenous genomic data sovereignty. Her work has been covered by popular media outlets including PBS NOVA, The Washington Post, NPR, New York Times, The Atlantic, Forbes, and Boston Globe. She currently serves on the Government Policy and Advocacy Committee for the American Society of Human Genetics and the National Academy of Medicine Announces Committee on Emerging Science, Technology, and Innovation. She is a current Global Chair in ENRICH (Equity for Indigenous Research and Innovation Coordinating Hub), which focuses on enhancing Indigenous rights to develop, control, and govern Indigenous data and supports participation in STEM and in digitally‐enabled futures.

My research can be encapsulated in two main foci: Indigenous population genetics and bioethics.