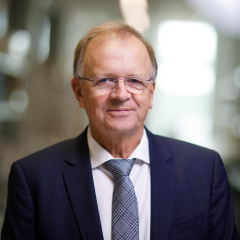 Peter Schlosser is the vice president and vice provost of the Global Futures Initiative at Arizona State University. He is a leading earth scientist, with expertise in the Earth’s hydrosphere and how humans affect the planet’s natural state. He holds joint appointments in the School of Sustainability, the School of Earth and Space Exploration in the College of Liberal Arts and Sciences, and the School of Sustainable Engineering and the Built Environment in the Ira A. Fulton Schools of Engineering. He is the University Professor of Global Futures

Schlosser’s research includes water movement and its variability in natural systems (oceans, lakes, river, groundwater) using natural and anthropogenic trace substances and isotopes as "dyes" or "radioactive clocks." His research adds to the understanding of ocean circulation and the ocean’s role in climate. He also studies reconstruction of continental paleotemperature records using groundwater as archive; anthropogenic impact on natural systems; and sustainable development. He has published hundreds of articles in leading journals. He completed his PhD in Physics at the University of Heidelberg.

Prior to joining ASU, Schlosser was the Maurice Ewing and J. Lamar Worzel Professor of Geophysics and Chair of the Department of Earth and Environmental Engineering, and the deputy director and director of research at the Earth Institute at Columbia University. He was a member and the founding chair of the Earth Institute faculty and a member of the senior staff at the Lamont-Doherty Earth Observatory. Other past positions include a professorship at the University of Heidelberg and a visiting professorship at the University of Washington-Seattle.

See Google Scholar for list of publications and citations.