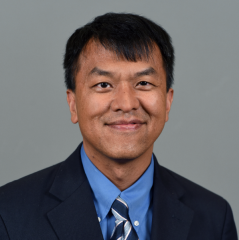 Dr. Sophal Ear is Senior Associate Dean of Student Success (as of 1 July 2022) and was previously Associate Dean for Undergraduate Programs and Global Development. He is a tenured Associate Professor in the Thunderbird School of Global Management at Arizona State University where he lectures on global political economy, global affairs, International Organizations, and management environment in Asia. He previously taught at Occidental College, the U.S. Naval Postgraduate School, and the Maxwell School of Syracuse University.

He consulted for the World Bank and the Asian Development Bank, was Assistant Resident Representative for the United Nations Development Programme in East Timor, Term Member of the Council on Foreign Relations, Advisor to Cambodia's first private equity fund Leopard Capital, Audit Chair of the Nathan Cummings Foundation, Treasurer of the Southeast Asia Resource Action Center, and Secretary of the Southeast Asia Development Program (Phnom Penh, Cambodia), and Corresponding Secretary of the Crescenta Valley Town Council. A TED Fellow, Fulbright Specialist, and Young Global Leader of the World Economic Forum, he sits on the Boards of Refugees International (Washington, DC) as Governance Co-Chair, Audit Chair of Partners for Development (Silver Spring, MD), Treasurer of the International Public Management Network (Washington, DC), and on the Executive Committee of the Center for Khmer Studies (Siem Reap, Cambodia). He chairs the Asian American and Pacific Islander Advisory Board of the Los Angeles District Attorney’s Office.

He is the author of Viral Sovereignty and the Political Economy of Pandemics: What Explains How Countries Handle Outbreaks? (Routledge, 2022), Aid Dependence in Cambodia: How Foreign Assistance Undermines Democracy (Columbia University Press, 2012), co-author of The Hungry Dragon: How Chinas Resources Quest is Reshaping the World (Routledge, 2013), and co-editor of the virtual issue of the journal Politics and the Life Sciences on Coronavirus: Politics, Economics, and Pandemics (Cambridge University Press, 2020). He wrote and narrated the award-winning documentary film "The End/Beginning: Cambodia" based on his 2009 TED Talk and has appeared in five other documentaries. A graduate of Princeton and Berkeley, he moved to the US from France as a Cambodian refugee at the age of 10.

Dr. Sophal Ear in the News.

The Hungry Dragon: How China’s Resource Quest is Reshaping the World (with S. Burgos), London, UK: Routledge, 2013. Released as paperback, 2015.

“Cambodia: The Challenge of Adding Value to Agriculture after Conflict” (with S. Burgos), Chapter 8 in an edited volume by Özerdem and Roberts entitled Challenging Post-Conflict Environments: Sustainable Agriculture (Ashgate), November 2012.

“Cambodia and the Washington Consensus,” Crossroads: An Interdisciplinary Journal of Southeast Asian Studies, 11(2): 73-97, 1997.

*    Jerome Tobis Medal, University of California, Irvine Interdisciplinary Center for the Scientific Study of Ethics and Morality to people prominent in their chosen field who have also given back to society (2019)

*    Co-Editor of the Cambodian Journal of International Affairs. Phnom Penh: Cambodian Institute for Cooperation and Peace (1996-1997)

*    Associate Editor and Webmaster of the Journal of Public and International Affairs. Princeton University (1995-1997)